The Surname Thing Gets More Confusing

FYI: Stand by for upcoming posts concerning new DNA developments which call in question the information about Hidden MacGregors of Clan MacFarlane. As more information and analysis comes available, we might have to revise some of the things that we have written here in previous posts. (Deason Hunt)

Thanks to Susan Hunt for sharing this with us for the Hunt Roots site.

I have evidence of three surnames in my ancestral line which I have traced by records back to Thomas hunt (Sr.) who was born ca 1787 in North Carolina according to the 1950 Blount County, TN federal census.

The graphic below is an attempt based on records and DNA information. The data following adding dates for times prior to 1787 contains my best attempt to show the times that name changes might have taken place. It is subject to change as more information comes to light. 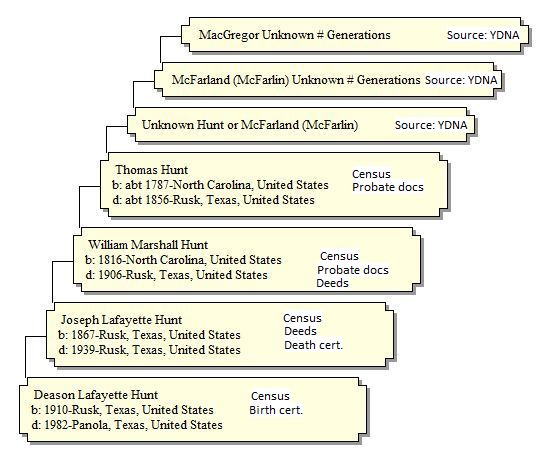 Deason Lafayette Hunt is the father of the author of this blog post authenticated by birth certificate, parental testimony, and personal experience.

From Wikipedia, the free encyclopedia

The Carolina Road or the “Old Carolina Road” are names for various sections of the Great Wagon Road and other routes in colonial America. “The ‘Old Carolina Road’, extending from Lancaster, Pennsylvania to the Yadkin Valley, was one of the most heavily traveled roads in eighteenth century America.”[1]

Central Virginia (High Road)
Starting in Pennsylvania, this “Carolina Road” led through southern Pennsylvania, Maryland, Virginia, the Carolinas, Georgia and into Alabama. This was a major migration route of Swiss-German and Scotch-Irish settlers into frontier America in the 1740s until the American Revolutionary War.

Some consensus indicates this Carolina road started in Frederick, Maryland, with feeder roads and other trails reaching from Pennsylvania. Parts of this Carolina Road, almost 55 miles, follow modern U.S. Route 15 through Loudoun, Fauquier and Fairfax Counties in Virginia.

Used as a transportation route, in addition to early settlers, manufactured goods including woolen and linen clothes and leather products, such as harness, saddles, boots and shoes, were sent so

uth, and hides, indigo and money were sent back north. Many drovers herded swine, cattle, sheep and even turkey flocks along the Carolina Road. Because many of these drovers would pick up cows and other livestock to add to their herds in northern Virginia, this was also called the “Rogues’ Road” by local farmers. “Indeed, as early as 1747, a Fauquier land grant refers to the Carolina Road as “Rogues Road,” a name that appears in Fauquier and Loudoun deeds throughout the early 19OOs. A few miles north of Leesburg, on old Montresor farm, a narrow wooded stream valley still bears the name Rogues’ Hollow, for tradition states that this geographic depression was the lair for thieves about to plunder travelers.”[3]

Counties in Virginia, north to south, in the 1740-1750’s which the Carolina Road passed through or near were Fairfax (Loudon part in 1757), Prince William, Culpepper, Orange, Louisa, Goochland, Prince Edward (part would become Henry in 1776), Lunenburg (Halifx formed from part in 1752 and Mecklenburg formed from part in 1764). Brunswick was adjacent and east of Lunenburg.

Halifx and  Mecklenburg counties Virginia are directly north of old Granville County, NC from which Orange County, NC was formed.

An early settlement by Morgan Bryan, a Pennsylvania Quaker, took six weeks to travel from Pennsylvania to North Carolina.
“The trail called “The Great Wagon Road” or “The Old Carolina Road” passed thru the Bryan Settlement, about one mile south of the junction of the Deep Creek and the Yadkin River, at a place called the Shallow Ford.[12]”[13]

South Carolina
In York County, South Carolina, the Carolina Road seems to have split, one branch going westward to Chester and south to Columbia, South Carolina along U.S. Route 321, the other branch of the road staying nearer the river to Columbia (U.S. 21). The road ended at the Savannah River across from Augusta, Georgia.[14]

HuntRoots
Create a free website or blog at WordPress.com.