Interactions between families of interest in our research in North Carolina, Orange County, Flat River region are shown between surnames of male lines of the four main Hunts (brothers?) in Rutherford County, North Carolina in the late 18th and early 19th centuries. They are William Wat Hunt (Veasey and Brackett), Absalom Hunt (Veasey and DeVinney), William Kinchen Hunt (Duke), and our Thomas Hunt (McFarland). Nothing was found for Brackett in Orange County. Veasey and DeVinney were both among surnames in the FamilyTree DNA study of Veasey.

In this post is the Flat River area mind map created from research findings. (The map is so large that it cannot be read here, but you can download a PDF file by clicking on this link: Flat River Cluster. 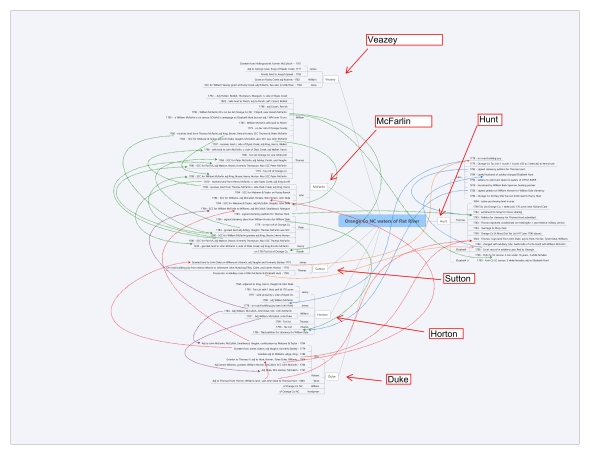 A part of the puzzle of parents and ancestors of Thomas Sr. is an as yet undetermined relationship to other Hunts in Rutherford County North Carolina in the 1800-1820 time period. They include Absolom “Ab” Hunt, William “Wat” Hunt , William “Kinchen” Hunt, and Catherine Hunt, all of whom appear as heads of household on the 1800, 1810, and/or 1820 Rutherford County, North Carolina census. All lived within about a four-square mile area of Rutherford County, according to veteran Rutherford County historian Harold Rollins who also has a connection with one of the Hunt families. These locations are confirmed by a study of maps and deed information for these individuals.

One published family history for the Taylor-Hunt and allied families in the area states that Thomas Hunt of the 1820 census is a brother of Wat Hunt.[1]  However, there is no documentation in the book to support the claim. The book emphasizes that Absolom Hunt and Wat hunt are not related, however, another book featuring Haw-Hunt families, states just the opposite: that Ab and Wat are brothers.[2]

A study of the 1800 census shows one male in the Wat Hunt household older than any of his known children.[3]

Descendants of Wat and Ab Hunt, and sister Catherine, all in Rutherford County by the early 1800’s and who would live out their lives there, have a similar situation in finding their parents and ancestors. They cannot prove the names of their parents. Speculation has led to a John Hunt who married an Elizabeth Tyas in Virginia and then came to western North Carolina, but there is no conclusive evidence. It is possible, but clearly not proven, that these three, Thomas, and Kinch are related in some way. If related, two possible scenarios are that  (1) Thomas Sr. and perhaps Kinch Hunt were raised by brother or Uncle Wat Hunt after the death or disappearance of Thomas’ Hunt parents (making him or both orphans) or (2) the same thing happened but that they were McFarlands and either were adopted or not legally adopted but took the Hunt name. Thus, as an adopted son(s), Thomas Sr. would have not shared in estate distribution in Wat’s will. It is also entirely possible that his relationship to other Hunts of Rutherford County is purely a coincidence of geography: they just lived near each other.

Thomas Sr.’s possible enumeration on the 1800 census in the household of William “Wat” Hunt of Rutherford County, North Carolina is based on a male child 10-16 years of age older than any known child of Wat Hunt and wife Rebecca Bedford.

By 1810, William K. Hunt appears on the Rutherford County, North Carolina census, page 108 with 1 male 26-45 and 1 female 26-45 (wife Rebecca Simmons) and no children. Thomas does not appear on the census, but he possibly was missed entirely or perhaps in the household of the parents of his young wife Lucy. Their marriage is estimated about 1809 with first child born estimated about 1810.

In 1820, Thomas appears on the Rutherford County, North Carolina census on page 387 and again on page 392. (The double listing is considered typical of a number of such in the early censuses.) Other Rutherford Hunts are enumerated on these pages: Absolom 327, Catharine 328, William (Wat) 328, William K. 328, and William Jr. 327 and 389. (Note the two listings for William Jr. are considered errors, as is a second listing on page 392 for Thomas Hunt.) Joseph Grayson, from whose land grant Thomas sold land in 1819, was listed on page 387.

An examination of North Carolina census records reveals no other Thomas Hunt who so closely matches the ages or birth places later indicated on censuses of the known children of Thomas and Lucy Hunt.